/ Roles on 100ms : Mapping real-world interactions to live video with a few clicks

Roles on 100ms : Mapping real-world interactions to live video with a few clicks

On this world’s stage, we all have a role to play. Turns out, the same is true for the world of live, interactive video applications.

If you’re building a live video app, a meeting room will contain people who will need to perform different functions. For example, in a virtual classroom, the teacher is able to display their video and audio, as well as share their screen. Depending on the app, they can also display a student’s screen to the rest of the class, allow the student to address the class, and more.

However, building these permissions (what participants can and cannot do within meetings) are difficult because they usually require some coding and implementation effort to set up. The more nuanced and varied the permissions in an app, the more effort devs have to expend to ensure that the final app offers the exact features required by end-users.

This article will delve into what these “roles” are, how they make your life easier, and how they are an improvement upon the industry standard “publish/subscribe” logic.

But, let’s start with the obvious question.

What is a role?

Before answering this question, we want to lay out 100ms’ mission: bring the world closer by enabling real, life-like, live conversations virtually. We want our customers to be able to offer their users an online interactive experience that is as close to the real-world as possible.

This is where roles comes in. They allow the easy recreation of real-life interactions on video, as this article will demonstrate with an example. In 100ms terminology, a role is a collection of permissions that allow users to perform certain tasks while being part of the meeting room. Essentially, the role determines whether a user in the room has publish/subscribe permissions. It determines whether they can speak, mute other users, be muted, share their screen, etc.

Before moving on, let us understand roles better by diving into the composing features:

Publishing rights: The term “publish” here refers to a user’s ability to share audio, video and if needed, their screen, when in a video call. The user’s particular role decides whether they can share their audio/video/screen to the room.

Subscribing rights: The term “subscribe” here refers to a user’s ability to view and listen to the video and audio being shared (“published”) by others in the room. Depending on the use-case, they may only be able to subscribe to one person’s (host) audio-video or to multiple users’ streams.

Permissions and Power: Developers and specific users of a video app should be able to configure and manipulate roles (others’ and their own). This would let them perform actions such as muting/unmuting others in the room, letting them share their screen or expelling them from the meeting altogether.

How Roles Work: An Example

Let’s take a closer look at roles through a simple example: a virtual events app for online concerts. The real-world experience this app is trying to replicate is denoted by the image below: Built with 100ms, this hypothetical app has three roles in place: “stage” (where the artist performs), “audience” (where the viewers watch the performance online) and “backstage” (where the person/people handling tech/logistics keep the show going as expected).

And, these roles will have the following permissions: However, most real-world scenarios need more than two roles to recreate real-world experiences. If you wanted more roles with varied permissions, you’d have to configure the same by coding it from scratch.

So, what’s the solution? How do we make the process of creating varied roles easier?

The answer: custom roles on 100ms.

Why are custom roles required?

As mentioned above, if you want to give users a nuanced, layered experience that matches their day-to-day life, two or three simple roles are not enough. Let’s take another example for this: a video consultation app for doctors and patients.

In the real world, patients are greeted by a nurse/receptionist who takes their information, they wait in the waiting room, and when the doctor is ready, they are called into the consultation room. With roles limited to host and audience, you can’t do this virtually. You would have to create custom roles for “waiting room”, “nurse” and the like, which is usually time, effort and resource-intensive.

However, using 100ms, you can create custom roles with far greater ease. Owing to our built-in customizability and extensibility, you can actually build such a consultation app with zero lines of code. This is demonstrated step-by-step below.

In the aforementioned video consultation app, we can customize a user’s journey by modifying who they are publishing to and subscribing to, i.e. whose audio-video they can watch/listen to, and vice-versa.

Here’s what the patient’s journey looks like: when a patient enters, they initially communicate with a nurse in a virtual “waiting room” where their information (name, gender, DOB, temperature, weight, symptoms) are noted by the nurse. After this, they wait until the doctor is able to communicate with them.

Using 100ms, devs can map out this exact journey without writing a single line of code—just a few clicks on the dashboard.

To demonstrate roles in action, let’s put them to a test and visualize a user’s journey to the online “clinic”. Handling Permissions for each Role

100ms enables users to quickly and easily modify the permissions of different roles and subscription strategies, right from the dashboard.

In the example, here’s what each role entails:

On the 100ms dashboard, we can assign mute/unmute, screenshare, publish/subscribe permissions to each of these role with a couple of clicks. We can even give certain roles the ability to change other roles or every remove somebody from the meeting room entirely. To go back to our example, we start by modifying the nurse role. 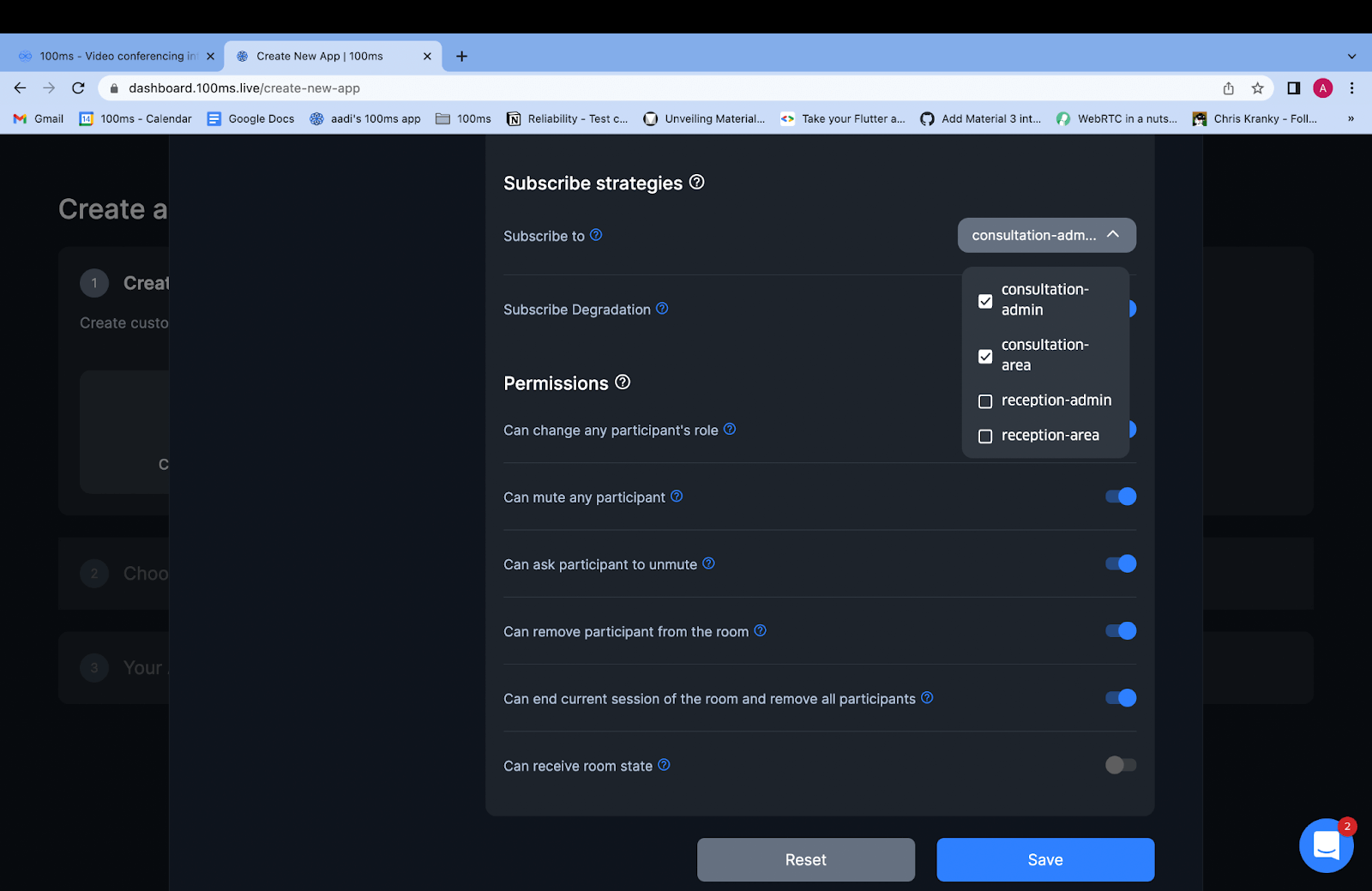 With that done, we have successfully modified user permissions for our use case. Now, we implement the app using nothing but the power of roles and customization provided on the 100ms dashboard. And just a note, we have been able to do all this without writing a single line of code!

100ms enables you to have a completely personalized subdomain for your app—for free. You can easily host these powerful video templates on your own domain URL with a click. The app is now ready to use. With that done, we are ready to test out the app.

Here’s what our newly set up telehealth app looks like:

We have successfully implemented a clinic-like experience digitally using nothing but roles on the 100ms dashboard.

This is just the start.

With custom roles at your fingertips, the applications are limitless. Here are a few quick examples of virtual scenarios you can easily build with roles:

Roles are the Silver Bullet in your App-Building Arsenal

As mentioned before, 100ms seeks to enable easier, more human communication by allowing customers to create interactive video apps that match our regular interactions as closely as possible. This is the whole point of the 100ms Marketplace.

Our customers don’t have to worry about how to set up permissions for users of their apps. They don’t have to work on the basics: coding permissions, publish, and subscribe strategies for specific scenarios. They only have to imagine and conceptualize how user journeys will work, and using roles, developers can set them up with a few clicks—no coding involved.

In fact, our customers have already achieved this. Have a look at how Mingout, a dating app used roles on 100ms to reimage first dates online.

For the developers out there, here is a closer, more dev-centric dive into how roles work, have a look at this video on Building a Clubhouse clone from scratch using React. It starts off by examining the 100ms SDK, and demonstrating how roles ease the process of app building.

If you’re curious, try it out for yourself. Get Started with 100ms for free, and play around with roles to bring an imagined app to life with just a few clicks!

Want to build a video call app with Snapchat-like filte...

In this blog, we will take you through a step-by-step g...

Building a Clubhouse clone with Svelte and 100ms

Clubhouse is a popular app that enables people to speak...