Live Video Infrastructure for the World

As dating app giants have proved by now, a few good pictures and quirky answers to predictable questions don’t do much to create long-term connections between people. Cute pictures and pretty words can generate initial interest but said interest is hard to sustain.

However, a certain app realized that, with some help from 100ms, they could bring people together in a more meaningful way.

Instead of swiping right or matching with people based on photos or bios, Mingout brings people together based on something they would like to do together. They differ from most dating apps by actually providing a virtual activity to go to. In other words, Mingout actually gives you something to do together on your first date.

Users on Mingout start by selecting virtual activities they want to attend with someone. Based on this, Mingout matches individuals, and they can talk in a private room while watching a live event, and have something interesting to bond over.

Note: This is a recreated mock-up of the actual breakout room. To respect the privacy of the actual participants on a date, we have not displayed real footage of private rooms.

Hosting virtual events and creating dates required Mingout to provide audio and video accessibility. This constituted a significant challenge, which 100ms was able to resolve within a few weeks.

The goal was for Mingout users to watch live events, whether in the lobby with hundreds of other users or privately with a date - without leaving the Mingout app. They also wanted to get through the whole process without having to put in so much time and effort.

100ms as a solution - Everything in one App

“When we saw the 100ms website, the whole process seemed quite easy to implement. Their portal is quite helpful, and we realized that it is a very flexible architecture. Within one hour, we could understand what we needed to do and replicate our use case. Whatever use cases we have, 100ms has always been there to support them.” - Devanshu, Mingout

Having been introduced to 100ms by a developer on their team, Mingout did their research and found that our product could help engineer and provide the exact user experience they wanted.

Customizations to match the problem

Beyond using our SDK, Mingout’s problem needed some customizations to be created and deployed. For example, an easy solution to the problem of pairing two users for a private virtual date was creating roles from a specifically engineered REST API on the fly.

We envisioned these roles as close as possible to the real-world roles a person can have in a virtual setting. Each role is primarily a collection of permissions that allows you to perform a certain set of operations while being part of the room. For example, Mingout was able to create the following roles for the ecosystem:

Permissions entailed in each role:

Mingout could create a significant number of roles beforehand (each with a unique ID), and once the event began, each user was mapped to one pre-existing role.

The permissions entailed in each role could be changed at any moment, thus shifting a user’s experience within seconds. For example, a small change in role shifted users from the lobby (where they could chat via text with everyone and watch the show) to a breakout room (where they can only talk to only one other person on video while watching the show).

With roles in action, two people could be matched (with their consent) much more easily. If Mingout decided that two users were likely compatible for a virtual date, a single click or an API call on the backend could put them in a breakout room, where they could watch the show and chat via audio-video.

Roles and breakout rooms allowed users to have dates in which they could watch an event together while talking on video.

Additionally, Mingout admins no longer had to moderate every virtual session. Instead, they could run the show from the back-end and only intervene when required.

Developers at Mingout also added their own customizations to the 100ms UI. Among other examples, they programmed the SDK to allow multiple artists/performers on the virtual stage. They also created custom hearts for the users to convey their love for a specific performer or performance.

The Moment of Truth: Valentine’s Week 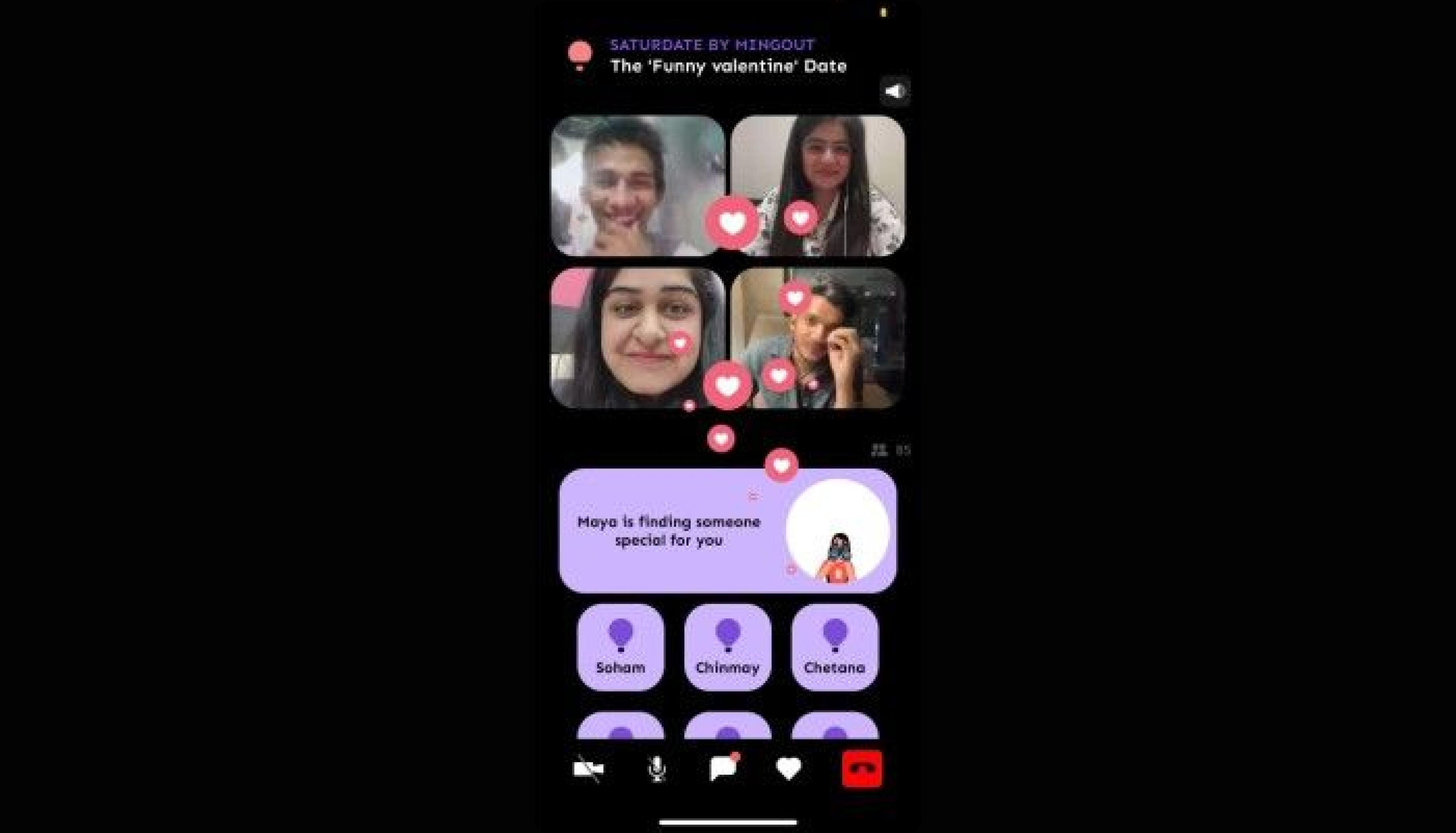 The Lobby during Valentine’s week event. Notice the multiple performers on stage and the custom-created hearts.

“The 100ms team is very supportive and empathetic. They came in, talked to us, and even added some ideas to our plate. On the event day, 100ms devs were present to check in on how everything was going. They helped with testing and offered to run a mock event beforehand to work out any bugs.” - Devanshu, Mingout

“On support and Slack, whenever we messaged, we got an instant reply. That responsiveness was really helpful for us.” - Soham, Mingout

From February 7th to 14th, Mingout hosted a series of events to celebrate all things love. These daily 3-hour-long events hosted hundreds of users, who logged in to watch live music and meet potential dates. Couple tickets were also available, allowing pairs to log in and watch the show together without being matched with anyone else.

On logging in, Mingout users are initially taken to a virtual lobby, where they could chat with multiple people and watch a live event. If Mingout found two users compatible, they were matched and shifted to a private virtual room, where they could watch the performance while talking on video.

Mingout Lobby while an event is ongoing

Before users joined, they filled out a form about their interests and preferences, and the info was used by Mingout to pair them up while at the event. Dates and pairings were run on their React Native app, while the shows were hosted on our standalone web platform, which made it easy for our support team to fix any bugs or problems.

As mentioned before, hundreds of roles were created beforehand. As users logged in, they were assigned to roles, matched after a few minutes in the lobby, and taken to a breakout room for their date. Our customized API let Mingout devs create as many roles as required on the fly (from a template using the REST API). This made the pairing-up process hassle-free.

Once in a breakout room, roles were manipulated so that two users could talk to each other on video and watch a show, but the artist’s video could only be viewed. Roles made it easy to change permissions so that the right people were publishing and subscribing to the right video streams. It also allowed users with couple of tickets to bypass the lobby, go straight to a breakout room and watch the show without talking to anyone new.

Over 8 days, hundreds of users logged into Mingout for Valentine’s Week events. In particular, Feb 13th had a large number of people logging in to listen to the musician Munawar play live. Other days also had hundreds of attendees.

“For a few events, we got a crazy response. For Munawar’s event, we were not able to read the messages in the chat because so many people were talking. At one point, I thought the servers would come down, but they didn’t.” - Devanshu, Mingout

Users could choose to stay in the lobby and watch the show without matching with anyone at all. While in the lobby, they could talk to all other users using the chat function with custom emojis we offer as part of our out-of-the-box UI. This also helped make the user experience more fun and engaging.

Amidst all these events, the audio-video stability of our technology stayed rock-solid, without a single instance of a crash or major lag. The entire week-long experience was hosted entirely on Mingout’s own app. Users did not have to shift to any other platform to watch anything or talk to someone, fulfilling Mingout’s key requirement.

Happily, we were able to solve the specific use-case Mingout required for their audience within a few months of collaborating with them. Mingout hosted successful virtual events and initiated many uninterrupted virtual dates with our robust video streaming capabilities. They could also provide better user experiences through unique customizations our team tailor-made to suit their use case.

Our SDK was able to expand and fulfill customer expectations satisfactorily. Even though Mingout’s requirements were new to us, we could use 100ms’ in-built scalability and flexibility to create positive results without too much effort, either for us or Mingout.

Our passion for solving difficult, real-world problems allowed us to help Mingout with making online dates more involved for users. We were able to offer video infrastructure that provided the reliability, performance, security and support Mingout needed to create the dating ecosystem they wanted.

By replicating the experience of going to a concert or event together, we could help Mingout in their objective of creating more human, long-term connections by giving people something to actively bond over.