Server-side Considerations for your WebRTC Infrastructure 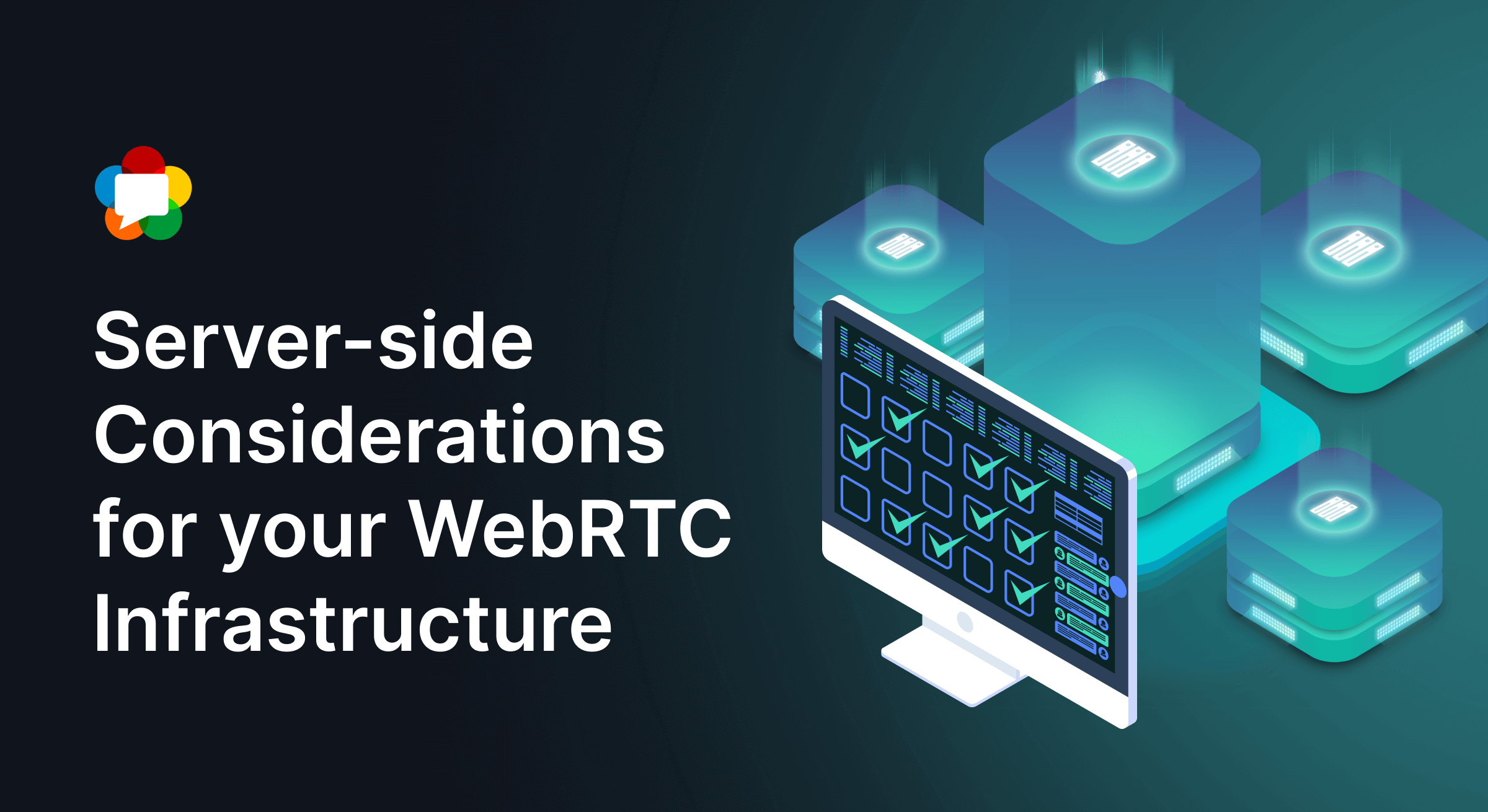 If they are to meet the expectations of contemporary users, video conferences must offer sub-second latency and high-quality audio/video transmission. Usually, developers choose WebRTC to build video experiences of this caliber.

You might’ve read or heard about how WebRTC is a client-oriented protocol that usually doesn’t require any server to function. However, that’s not the whole story.

The Server in WebRTC

It is true that some WebRTC calls are possible without any need for an external server. But, even in those cases, a signaling server is required to establish the connection.

Most calls would simply fail on a direct connection and even if they do connect, issues start arising as more peers join in — something we will discuss later in the article. To solve these issues, it is recommended that you use different servers that provide workarounds and call performance optimization in WebRTC ecosystems.

This article will discuss a few elements on the server side you must consider when building a WebRTC solution. We will talk about the servers, multi-peer WebRTC architecture, and how it all works — so that you make the right architecture choices for your WebRTC application.

The following is the list of servers explored in this piece. Some of these servers are mandatory while the presence of others will depend on the architecture you choose to work with:

Signaling refers to the exchange of information between peers in a network. It is required to set up, control, and terminate a WebRTC call. WebRTC doesn’t specify a rigid way for signaling peers, which makes it possible for developers to manage signaling as they see fit. To implement this out-of-band signaling, a dedicated signaling server is often used.

Even though most state changes like voice mute/unmute can be notified to the other peer(s) through WebRTC data channels, the signaling server has to be present throughout the call. It must be used to handle unusual scenarios like network disconnection where the peer requires signaling to reconnect to the call again.

Now, we will take a look at the multi-peer architecture in WebRTC, before moving on to the servers we might need once signaling is complete.

In WebRTC, there are multiple architectures that define how the peers are connected in a call. Generally, the server-side requirements depend on the architecture that you choose. Picking the right architecture for your use case helps identify the servers you will need.

We will now take a look at the most popular WebRTC architectures:

Below, we discuss these architectures along with the servers they need to function properly.

In this architecture, every peer is directly connected to every other peer in the call. For example, in a call with 4 peers, every peer has to send their video to 3 other peers and receive video from the same 3.

This is generally suitable for WebRTC calls with a limited number of peers. 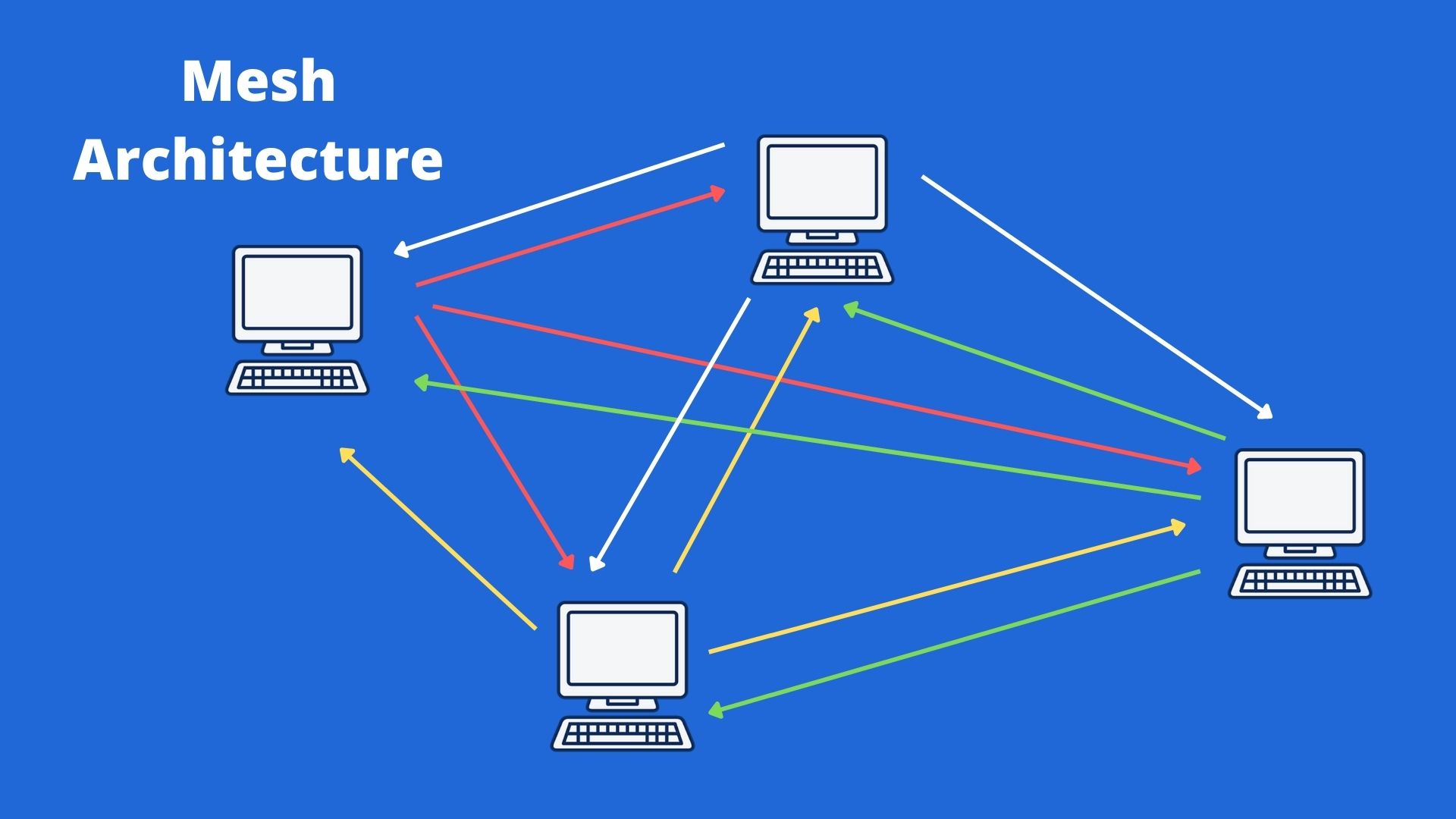 When a direct connection is not possible in this architecture, NAT traversal servers like the STUN and TURN server can be used.

A STUN server is used to retrieve the public IP address of a device behind NAT. This allows the device to communicate after learning its address on the internet. This is enough for roughly 80% of connections to be successful, but it cannot be used for cases where the peers are behind a Symmetric NAT.

A TURN server is used to relay media between peers when a direct connection is not possible — often due to a Symmetric NAT in the network or a firewall blocking connections.

The TURN server is also known as the “relay” server and costs more than STUN to maintain because it relays media throughout a WebRTC connection. Since the TURN server is an extension of STUN, its implementations include a STUN server built into it by default.

For more details on STUN/TURN servers and how to use them in a simple WebRTC video app, have a look at Build your first WebRTC app with Python and React. 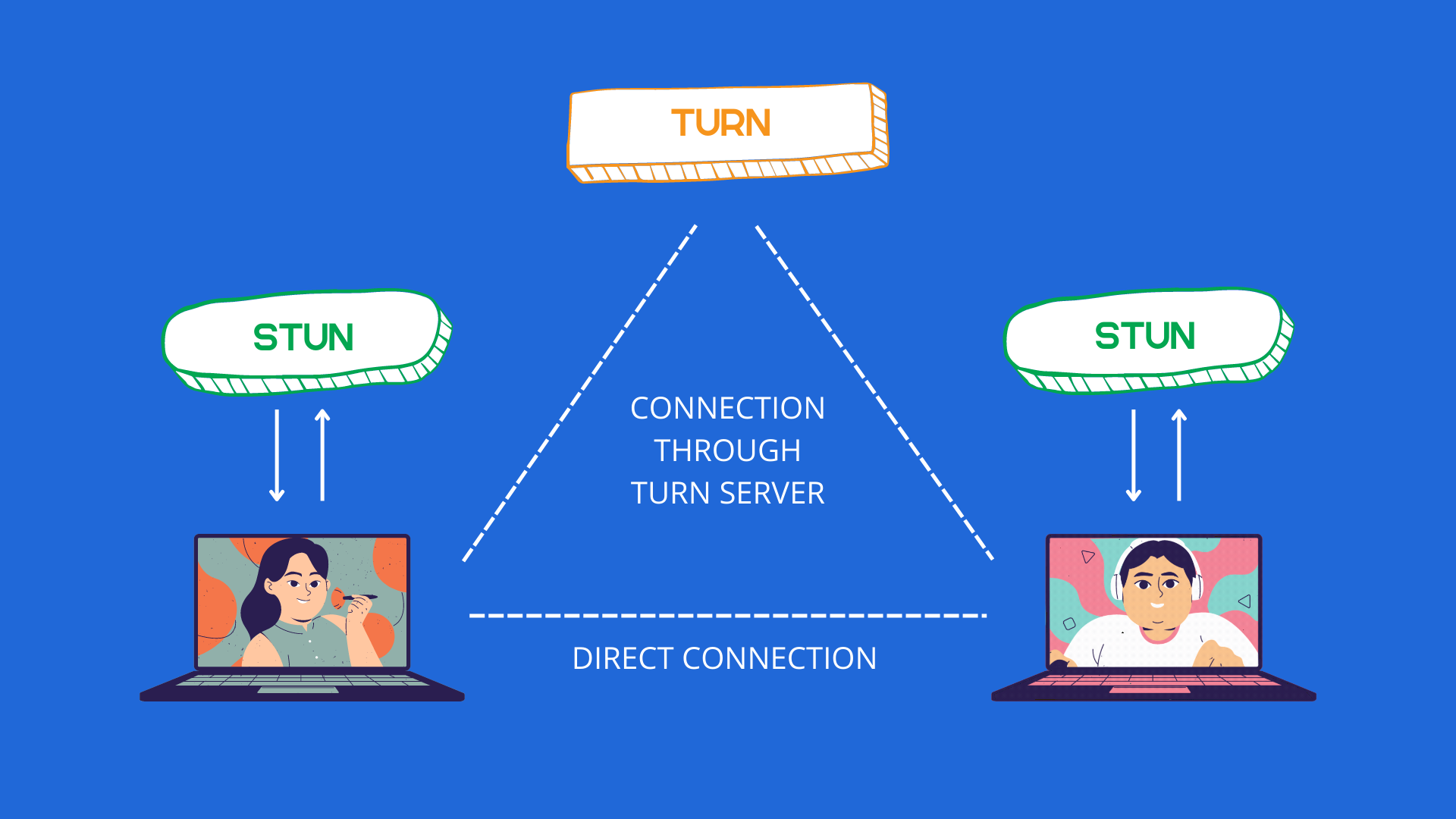 Advantages and Disadvantages of Mesh Architecture

Exploring the Mixing and Routing architectures requires some familiarity with the idea of WebRTC Media Servers. So let’s start with that.

In the Mesh architecture, bandwidth expenditure becomes quite high for peers when the number of people in the call exceeds 4. The resource consumption tends to skyrocket, overheating the peer devices to the point that they can malfunction or even crash.

Therefore, for use cases with more than 4 people in a call, it is recommended that you choose an architecture based around a media server.

WebRTC Media Servers are central servers that peers send their media to, and receive processed media from. They act as “multimedia middleware” and can be used to offer several benefits. But, trying to implement one from scratch isn’t exactly a walk in the park.

Even if we use a media server, we must ensure that they’re available to the peers via TCP with the help of a TURN server sometimes.

A well-implemented media server is highly optimized for performance and can offer numerous capabilities outside its main requirement. Here are some useful features an ideal media server should have:

Video is served to the peers at different bitrates based on their configuration or network conditions. The peers send their video at multiple resolutions and bitrates to the media server and it chooses which version to send to each peer.

Call recording is made possible either by directly forwarding all incoming media from the server to storage or by connecting a custom peer to the server that receives all media streams and stores them.

Not all peers connected to the call might support the same audio/video codec. The media server should be able to resolve this issue by transcoding the audio/video to an appropriate codec supported by all, before sending the streams out.

Customized audio/video optimization should be possible. The server should be able to send only the media of active speakers to reduce bandwidth consumption, selectively mute audio from someone, or prioritize screen-share media over other videos.

Here are some of the widely used media servers:

Now, let’s discuss the architectures (Mixing and Routing) that use these media servers to solve issues commonly faced in the Mesh architecture — high bandwidth expenditure and heavy resource consumption.

An MCU server receives media from all peers and reworks it, performing the following functions:

This process is done parallelly for every single, separate peer in the call. This makes it easy for peers to send and receive media as a single stream without spending too much bandwidth. 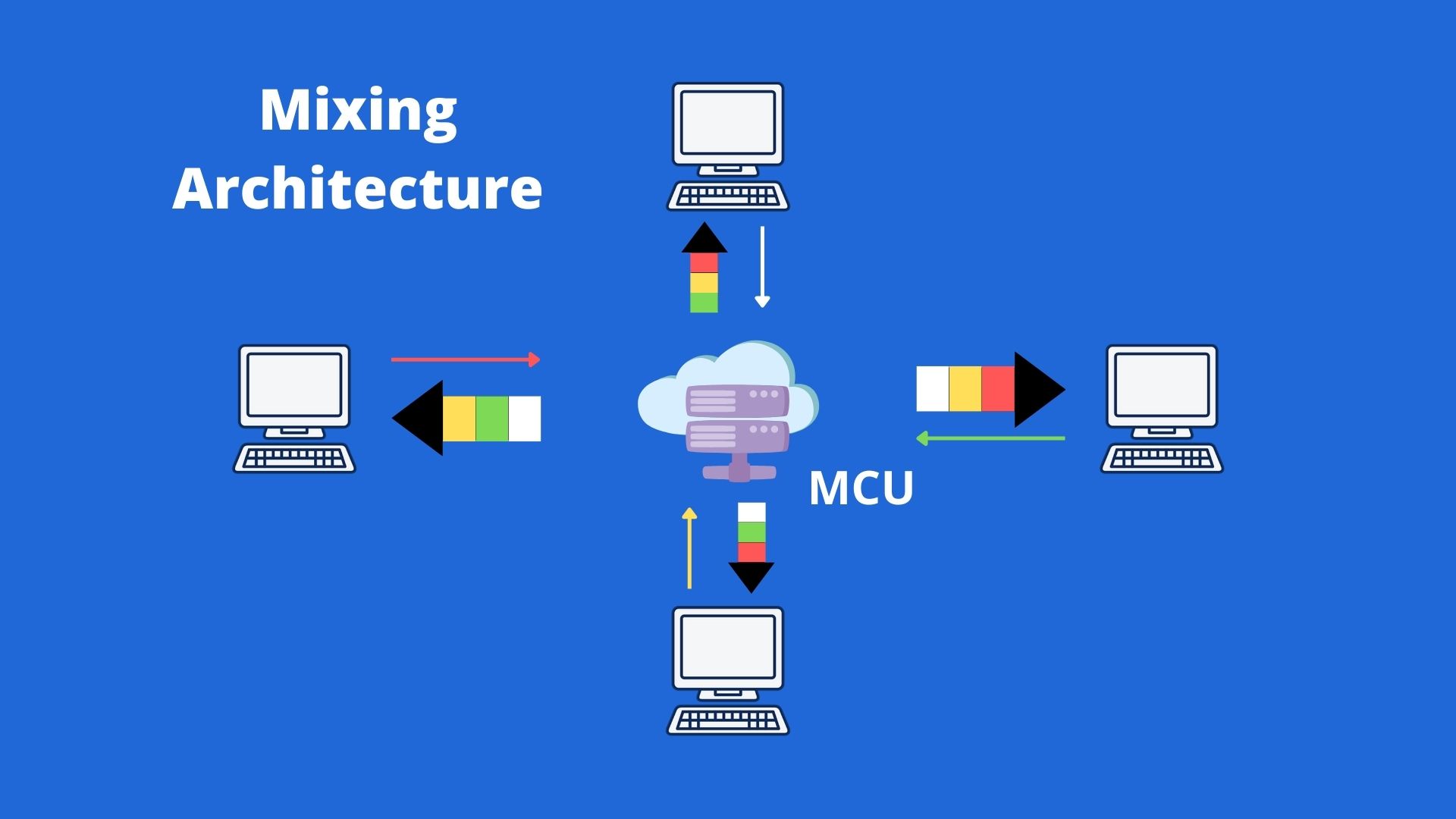 Advantages and Disadvantages of Mixing

While this sounds like a great option, the number of peers in a call directly depends on the performance of the MCU in the Mixing architecture. In reality, it is hard to maintain a WebRTC call with more than 30 peers in Mixing architecture, without the MCU heavily draining server resources.

Despite this, Mixing remained the most widely used WebRTC architecture until a few years back. However, it has been slowly replaced by the Routing architecture.

An SFU server receives media from all peers in a call. Then, all that media is routed “as is” to every other peer connected to the server. The peers can send more than one media stream to the server, making simulcast possible. The SFU can also be customized to automatically decide which media stream to send to a specific peer. 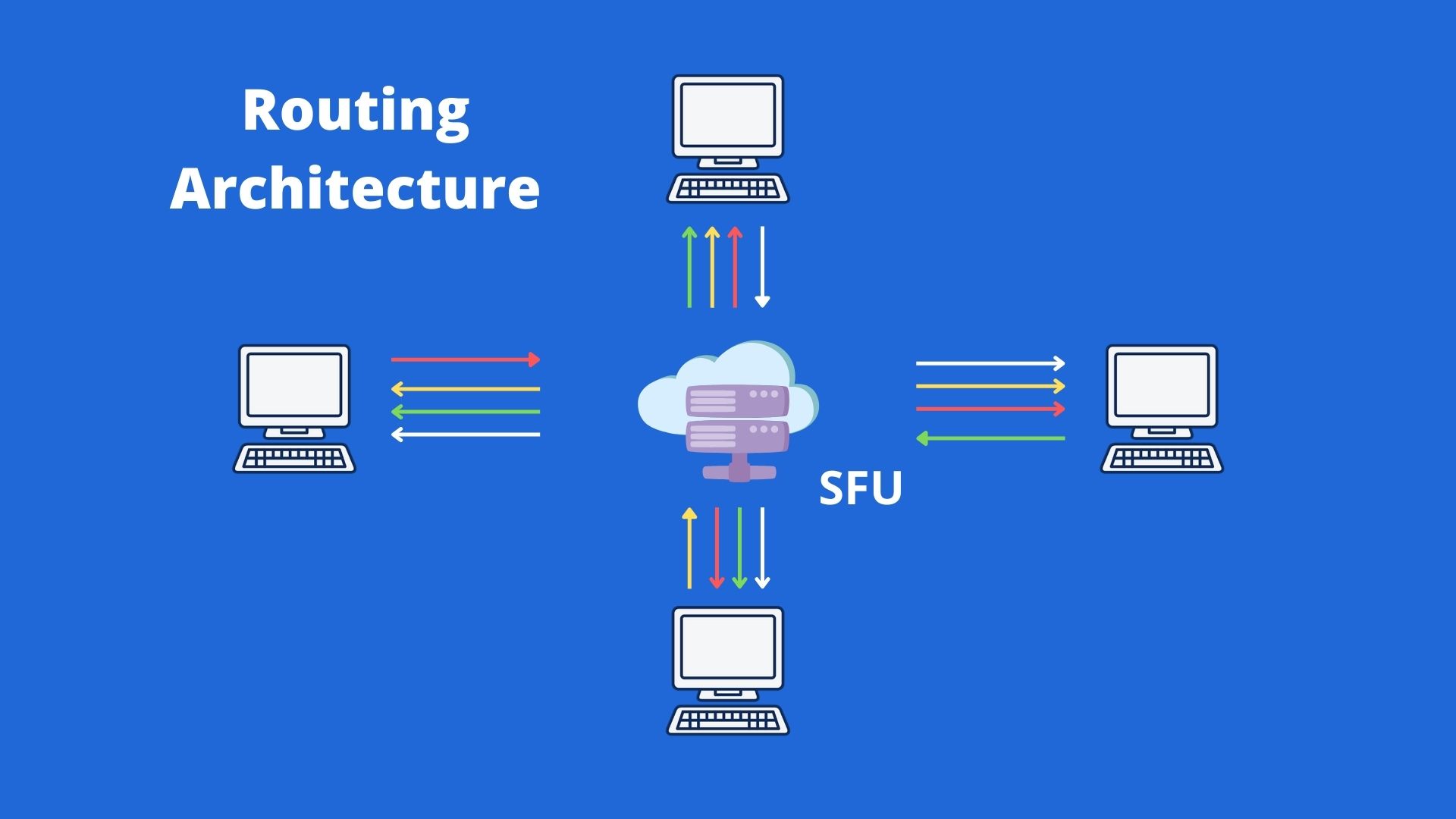 This is a fairly recent development in the domain. SFU Relay servers are simply SFU servers that can communicate with each other. One SFU server can relay media to another, creating a distributed SFU structure. This reduces the load on a single SFU and makes the whole network more scalable. In theory, any server can connect to the SFU relay via an API and receive the routed media.

Advantages and Disadvantages of Routing

To wrap up, let’s quickly summarise the architectures and corresponding use cases discussed above:

It is also possible to dynamically switch between different architectures based on the call size, so as to find a balance between app performance and server costs.

Choosing and implementing the appropriate WebRTC server and architecture is just one side of the coin. Much more is required to make your WebRTC service reliable — optimizing performance, reducing call failure rate, and handling edge cases.

If you’re planning on writing your own media server, you should also be aware of some basic problems that often show up in the process:

In short, even if you choose the right server-side architecture, you will still have a lot to deal with regarding the technicalities of WebRTC.

If you don’t want to deal with the intricacies of WebRTC but still want to host calls with a gold standard video solution (be video conferencing or streaming), you have options like 100ms to do the heavy lifting for you.

100ms’ live video SDKs allow you to add live video capabilities to your application with just a few lines of code. With multiple highly-relevant features and a predictable pricing plan, you don’t have to worry about dealing with exorbitant server costs for your app.

If your application requires high-quality video capabilities but you’re unsure about building it from scratch, or you just don’t want to deal with fine-tuning the nitty-gritty of WebRTC, 100ms is your best bet.